Is Childcare the New Measure of Successful Ag Conferences? 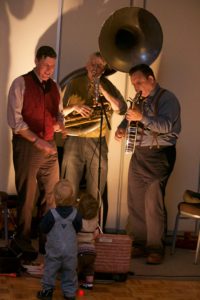 Earlier this month I attended the Ecological Farmers Association of Ontaio (EFAO) conference in Kingston. On my way to find a room for one of numerous practical sessions, I bumped into a doorway at the corner of the hall with a small sign “EFAO Child Care” in colorful letters. Did I imagine hearing “you are not in regular farm conference territory anymore,” among the enthusiastic high voices of about ten toddlers?

Delightfully, I found the room for my session had a window. I wondered how folks who spend most of their days in natural light, on soil with plants and livestock, tolerate hotel habitats without natural light?  The screen for the power point presentation was mostly ignored as a farmer told us about grazing problems and successes. Each typed line and photo prompted a new example embedded in story, to be met with questions, other experiences and often laughter. The self-selected group of graziers grew in knowledge and confidence.

One of the plenary speakers, Paula Anderson, is conducting her PhD research in Indigenous Studies at Trent University. She challenged us to think about how settlers, including her ancestors, had displaced the land management of indigenous peoples who had been practicing resilient agriculture. Wild rice or manoomin (good berry) continues as a food source, although some in recreational lake country would prefer to restore lakes understood to be inundated with this aquatic plant. She asks: “restore for whom and for what in the context of livelihoods for seven generations?” 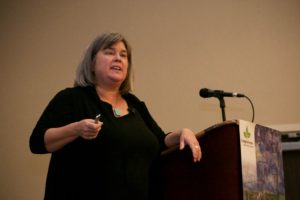 Anderson made the case for how settlers in their cultural and religious world view perceived humans to be separate from the natural world and thus stripped the natural world of sacredness. Her indigenous friends and teachers are inviting her to consider how all of us might reimagine the relationality of ecosystems. In order to sustain life, she urges us to humbly situate ourselves as partners in the web of life. She told a wonderful story about the sequence of drinking sap from a sugar bush as medicine for men to have energy to fish, while women collected early forest greens, before planting the three sisters, corn beans and squash, in mounds, with residuals of fish as fertilizer.

The last plenary speaker, Jeff Moyer of the Rodale Institute (www.Rodaleinstitute.org) in Pennsylvania, explained how the roller crimper was developed in response to challenges from conventional farmers about excess tillage in organic systems. Cover crops have long been assigned the most important crop status at Rodale. However, knocking them down without herbicides, before cash crops, was not consistently achieved with culti-packers, stalk choppers, flail mowers and other gear. According to Moyer, when his wife made pasta with a special rolling pin with chevron shaped blades he thought of the crimpers on his haybine. A few conversations and welding experiments later, the roller crimper was born. Cover crops can now be rolled into mats where no-till planters immediately plant the next cash crop.

Roller crimpers come in all sizes, from an attachment on a two wheel tractor tiller to a 60 foot rig used by Howard G. Buffet, author of the book, Forty Chances. He still farms with pesticides as he deems necessary but given he has the genes of his father, Warren, he assesses the roller crimper to be more cost effective and gives it a good review.

“There is a small, sturdy, low-tech implement that we are starting to believe may have more potential, pound for pound, to help poor fragile farmers feed their families than big tractors and planters can. It’s not fancy or shiny and our guys welded modifications to the original design themselves…It’s called a roller crimper and it looks like an oversized kitchen rolling pin with a raised-pattern surface. It kills cover crops without chemicals. It can be mounted on a tractor, scaled up to be pulled by a large tractor or scaled down to be pulled by oxen.”

The EFAO conference with about 250 attendees was a potpourri of practical workshops, plenary sessions, intense conversations over excellent meals, discussions on farmer-led research, trade show exhibits, a silent auction, a funky 3 person band including a sousaphone, member recognition awards and of course, childcare. Children bring young moms and dads and smiles as they play hide and seek around banquet tables. Having attended many conferences, I’m now pondering how a gathering, including childcare, evokes the context of hope, creativity and humour required to imagine and realize a world of promise for today and future generations.